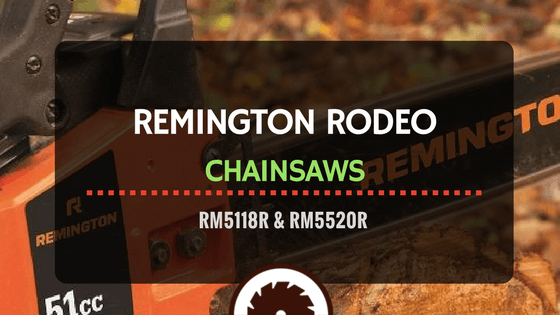 Available for a very reasonable price, the Remington RM5118R Rodeo is a mid-level budget gas chainsaw for periodic use around the house. Equipped with an 18-inch saw arm, it excels at cutting through everything from firewood, to branches, and more. Possessing an electronic ignition system, it’s easy to start up and get running in all types of conditions.

Let’s start our RM5118R review by talking about its overall construction and design. Possessing a saw arm that measures in at 18 inches, this saw is large enough to slice through the majority of wood pieces in one fell swoop.

With a power head made out of tough plastic and metal, this chainsaw is capable of withstanding quite a bit of wear and tear. However, weighing in at 25 pounds, it’s a great deal heavier than many other chainsaws on the market. This can be a problem if you’re short of stature of low on physical strength.

Equipped with a long, roundabout handle which starts at the top of the power head and ends on the left side of the power head, it offers tremendous gripping capabilities. For safety purposes, it sports a plastic guard which blocks your hands from the chain and debris from your body.

Overall, the RM5118R possesses middle of the road construction and design. While it’s on the heavy side, it’s fairly durable and easy to handle.

Next, we’ll talk about the RM5118R’s overall ease of use. Compared to many chainsaws of its ilk, this one is actually fairly easy to use.

Equipped with an electrical ignition system, it starts with the simple pull of a drawstring. It typically doesn’t take any more than one or two pulls to get up and running. This makes it easy for users of all strength levels to turn on.Where some people might have trouble with this saw is in its overall weight.

Weighing in at 25 pounds, it’s a little difficult for some people to use for extended periods of time. However, due to its low-vibration design, it does work to take some of the vibration off of your hands. This allows you to work longer than you could if such vibration was present.

For its price, this is a reasonably easy-to-use chainsaw. While there are some chainsaws at its price which weigh less, this chainsaw still offers much in the ways of handleability and general operation.

For the next part of our Remington RM5118R review, we’ll discuss its overall power capabilities. Possessing a gas motor that supplies 51cc of power, this chainsaw actually packs quite a punch for its price.

Regardless of whether you’re cutting firewood, tree stumps, branches, or otherwise, this chainsaw should provide enough power to make its way through. It should be noted, however, that this is not the strongest chainsaw around. Though it will make its way through these wood pieces, it might take a little extra time.

All in all, as far as power goes, it’s a fairly standard residential-use chainsaw. It certainly isn’t going to accommodate frequent cutting tasks but will work just fine for periodic use around the house.

Equipped with a large, 18-inch saw arm, this chainsaw is equipped to slice through everything from tree stumps, to branches, to firewood, and more. While it does this reasonably well, it does have a tendency to kick back on occasion. So, while it will cut through just about anything, it will take some time.

This is not a commercial-grade chainsaw. It’s designed primarily to handle occasional cutting tasks around your house or small commercial property. For this purpose, it does a fairly good job.

The truth of the matter is that, at its price, you’re not going to find a chainsaw that cuts much better than this one. If you’re looking for something that will slice through anything rapidly on command, you’re going to have to spend a lot more money. This is not a perfect chainsaw, but it does serve its general purpose.

The simple fact of the matter is that every chainsaw you use is going to be loud. There’s little you can do to avoid that. As far as volume goes, the RM5118R is fairly standard. It’s certainly not quiet, but it’s also not inordinately loud.

You shouldn’t have too much trouble using it around the house. While it will bother your neighbors to an extent, it’s not going to get the cops called on you or anything of the sort. It’s no worse than a standard lawnmower.

For its price, you’re not going to find a chainsaw that’s any less quiet than this one. You certainly shouldn’t let its volume alter your ultimate decision on whether or not to buy it. If you’re sensitive to loud noises, you can also wear ear plugs.

Equipped with a 20-inch saw arm, the Remington RM5520R Rodeo Pro is a large, budget chainsaw which is good for occasional use around the house. It possesses a low-vibration handle which can be easily gripped by users of all strengths and sizes. Coming with a QuickStart electrical ignition system, it can be started easily with just the pull of a rope.

Let’s begin our Remington RM5520R review by discussing its overall construction and design quality. Weighing in at around 20 pounds, this chainsaw is certainly on the heavier side. This might make it a little difficult for some users to handle.

It is, however, very durable. With a power head made out of tough metal and plastic, it’s capable of withstanding quite a bit of wear and tear. Equipped with a huge, 20-inch saw arm, it’s capable of making its way through everything from firewood, to branches, to stumps, and more.

Sporting a roundabout handle which starts at the top of its power head and ends at its side, it’s extremely ergonomic and easy to control, provided you’re strong enough for its weight. For a chainsaw of its price, the 5520R possesses fairly standard construction and design quality.

Now, for our Remington gas chainsaw reviews, we’ll talk about the 5520’s overall ease of use. For the most part, this chainsaw is fairly simple to start and operate.

Equipped with an electrical ignition system, it can be started with the simple pull of a drawstring. Typically, it takes no more than 2 pulls of the string in order for it to be up and running. Sporting a self-lubricating oiling system, its chain stays smooth and consistent at all times, provided that its oil tank is filled.

The only thing that might make this chainsaw difficult to use is its weight. Weighing in at 20 pounds, it’s on the heavy side compared to many other chainsaws. However, for its relatively low price, it’s about as easy-to-use of a chainsaw as you’re going to find.

The next aspect we'll cover in our Remington Rodeo chainsaw review is the 5520's overall power capabilities. A gas chainsaw, it is capable of producing up to 55cc of power.For a chainsaw at its price point, this is quite a bit.

You won’t have much trouble cutting through logs, firewood, branches, or any other types of wood. However, this is not the most consistent chainsaw on the market. Sometimes it runs smoothly, and other times it’s a little hesitant to operate at its full capacity. But for general around-the-house use, it should suit you just fine.

Equipped with a large, 20-inch saw arm, the 5520 is designed to cut through woods of all sizes, from logs, to branches, to firewood, and more. The majority of the time, it is able to accommodate these tasks with no problems.

However, this is far from a perfect chainsaw. It does have a tendency to kick back, even more so than a typical chainsaw. For its relatively low price, it still offers decent cutting ability. It’s not the best, but it will get you by if you only need to use it occasionally.

As far as noise goes, the 5520 is a pretty run-of-the-mill chainsaw. It’s not obnoxiously loud, but not all that quiet either. When it’s being used, it won’t sound too much worse than a typical lawn mower. For a chainsaw at its price, that’s the best you can ask for.

Differences Between the Models

In addition to this, the RM5520R is equipped with a slightly more powerful motor. Producing 55cc of power, the RM5520R beats the RM5118R’s 51cc by just a bit. Of course, this just helps to accommodate the longer saw-bar of the RM5520R, allowing it to move at the same rotations per minute as the RM5118R.

How do they compare?

Below, we detail some of Rodeos' major competitors in the market, and how they compare against the Remington Rodeo chainsaw models.

For the last part of our Remington Rodeo chainsaw review, we’ll compare the 5118 and the 5520 to similar chainsaws on the market. Let’s start with this 20-inch gas chainsaw from Poulan Pro. When compared to the 5118 and 5520, it’s most comparable to the 5520.

Both chainsaws are relatively powerful, with the Poulan Pro possessing 50cc of power and the 5520 possessing 55cc of power. They are also both very easy to use, possessing automatic oiling mechanisms that keep them running smoothly.

For the most part, these two chainsaws are very similar. The only differences are in price and consistency. While the Poulan Pro is slightly cheaper than the 5520, it’s also a little less consistent in its cutting ability.

If you’re looking for a better-performing, but more expensive version of the 5118, you might consider this chainsaw by Husqvarna. Like the 5118, it possesses an 18-inch saw arm and around 50cc of power.

Where it beats the 5118 is in ease of use, cutting consistency, and overall performance. This chainsaw is better equipped for more regular cutting tasks, whereas the 5118 is better for occasional, around-the-house use.

This chainsaw from Blue Max is similar to the Remington Rodeos in that it’s a budget chainsaw which is designed for occasional use around the house.

Where it differs is that it’s a combination chainsaw, capable of accommodating both 20-inch and 14-inch saw arms. This allows it to be used for both large and nuanced cutting tasks.

Where it falls behind the Remington Rodeos is in its power, providing on 45cc of power compared to the Rodeos’ 51cc and 55cc. It is, however, slightly cheaper than both of the Rodeos. Overall, the Rodeos are better chainsaws. However, if you want more ability to cut with nuance, you might be interested in the Blue Max.