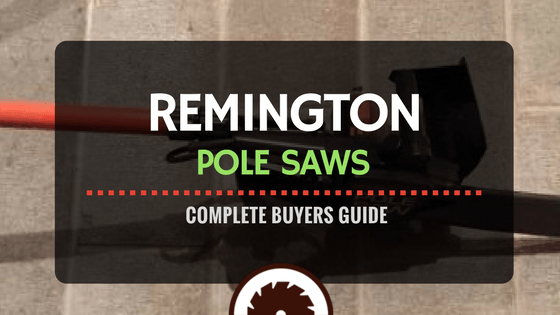 A lot of us have gardens or yards that we like to tend to on the weekends, so we want a tool that works best for us that has great cutting efficiency, easy usability, and most importantly, doesn't leave our wallets dry. So, if you're searching for the best pole saw that can cater to your garden cultivating needs, we provided a Remington review for all three saws below.

Many may prefer gas-powered pole saws for their cutting speed, but the RM1025SPS Ranger, also known as the Remington Branch Wizard Pro 10 electric pole saw, can do the job just as well.

Below are the main features that the Remington RM1025SPS Ranger pole saw provides:

You can check out this video out to see how the saw operates and how efficient it is at cutting tree branches:

If you're looking to get access to overhead branches, this Remington 10-in 8-amp corded electric pole saw could be what you're looking for and can be an optimal choice for many professionals. Favored for its functionality, versatility, and efficiency, this chainsaw is lightweight and can be operated by pretty much anyone.

This video shows the Remington RM1025P performs while cutting a particularly thick branch:

For those that prefer a Remington gas pole saw, the Remington RM2599 Maverick has a user-friendly design that's built to slice hard-to-reach tree branches and limbs without the use of a ladder. With a price that's lower than $200, this saw weighs around 20 pounds with a full oil tank and fuel reserve.

Below, you can see one of many videos on how the Remington Maverick operates:

Differences between the models

The most obvious difference between the three chainsaws is the fact that one of them is gas powered while the other two are electric. The Remington RM2599 Maverick is powered by gas where you have to mix oil and gas in order to operate it. Because it's gas-powered, it's louder than the Remington saws.

Based on our Remington pole saw review, the Ranger models are not self-lubricating. The Remington RM2599 Maverick automatically lubricates itself so you have one less thing to do while cutting. With the RM1015SPS vs RM1025SPS, the maintenance and cleanup is easier with the RM1015SPS and extends 9 feet, which is average for an electric model.

The Remington RM2599 Maverick has two interchangeable pole segments that allow for longer or shorter pole lengths. Although, the pole is a few feet shorter than the ones on the Remington RM1025SPS and RM1025P Ranger. The Maverick can also be used as a multipurpose tool which means you can attach a leaf blower, a hedge trimmer, or garden cultivator, which isn't the case for the electric saws.

Between the Remington pole saw parts of the RM1025P vs RM1025SPS Ranger, there's not too much of a difference. The RM1025SPS model is a simply newer version of the RM1025P saw, with slight fixes and changes. The improved design was meant to have fixed the leaky oil problem from the older model, but of course, any chainsaw might leak a bit of oil when stored so it's to be expected.

How do they compare?

This section will look at several pole chainsaw models that compare to the Remington pole saws reviewed above. Some of these models have similar features, and only minor differences can be noted between them.

For a cheaper alternative to the Remington RM1025SPS and RM1025P Ranger, the Sun Joe Electric pole saw has a pole that can extend up to about 9 feet for a full reach of 15 feet. It's designed to cut high tree limbs and thin logs and is equipped with a less powerful 6.5-amp motor compared to the 8-amp motors both Remington Ranger models carry.

It claims to be able to cut branches up to 7.5 inches thick and has an 8-inch Oregon cutting bar and chain that automatically lubricates itself, a feature that lacks in the Ranger saws. Overall, if you want a saw that won't emit any fumes, is light, and designed for pruning and trimming thin branches and logs, the Sun Joe Electric pole saw could be an optimal choice.

The GreenWorks pole saw includes a G-MAX 40V 2amp battery and charger and an 8-inch bar and chain for easy branch trimming. It also automatically oils itself when necessary to ensure durability and optimal performance equipped with a translucent oil tank so you have a clear view of the oil level.

But keep in mind that battery powered chainsaws are usually less powerful than electric and gas-powered saws, so the GreenWorks saw isn't meant to cut through thick branches and logs, but is more designed for thin tree limbs and pruning. It also only runs for about 60 minutes on a full charged 2ah battery, which is about 50 cuts or so on a single charge.

This is another cordless pole saw that's runs on a 20-volt battery. It extends from a length of 6 ½ feet to 10 feet with an extended length of 14 feet and has up to 100 cuts per charge. It's a bit pricier than the Ranger saws, but it's a good choice if you want to worry less about cords.

It has an 8-inch chain that's able to cut branches at least 6 inches thick so it can do a pretty decent job when it comes to trimming tree branches or small logs. It's even lighter than the GreenWorks cordless pole saw for it weighs just 6.3 pounds.