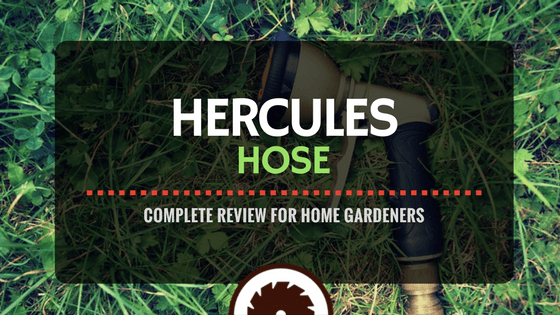 You may have seen the commercial for the Hercules Hose on TV. In the commercial, they drag the hose over razor wire and test it against a shark attack. Most of us just want to know this product will stand up to typical use and not need to be quickly replaced.

In our Hercules Hose review, we'll be taking a look at this product in terms of performance, forgiveness, build quality, look and feel, and price.

Does the Hercules Hose perform as shown? In the commercial, the metal casing withstands lawnmowers, weed eaters, and heat. The Hercules Hose commercial demonstrates the hose enduring many tests to show how tough the metal casing is. The metal casing is tough, but there are other parts of the hose that contribute to overall performance. While most of the hoses probably live up the quality demonstrated in these tests, some common defects seem to occur. Hercules garden hose reviews have reported leaks coming from the middle of the hose, suggesting that the inner lining is easily damaged.

Hercules Hose reviews from some users have revealed some drawbacks. Some users reported that the hose produces a narrow flow of water. This may help with making the hose lightweight, but can be considered a drawback if a heavier flow is desired. Using a nozzle, like the Mighty Blaster may remedy the problem.

Over time, hose performance may begin to change. Before casting your hose out, take a look at this video for some simple troubleshooting steps to get your hose performing at its best again:

Is this product right for all consumers? The commercial begins by saying, “you need a hose as tough as you are.” Would this hose be right for a person who isn't physically strong? Winding up your average garden hose can feel like an athletic challenge. It involves using long arm strokes to wind the hose. Even with a hose winding tool or case, the hose needs to be readjusted periodically while bending over toward the ground. The process never seems to go as demonstrated.

The wind-up reel seemingly solves the problem of needing to be hunched over while winding the hose. The reel works from a standing position. One hand holds the reel steady, the other winds.

Another area that may cause a hose user a challenge is in the attachment of the hose to the faucet. The anti-leak connector seems to work well and screw on to the faucet with ease.

The Hercules steel garden hose is made of high-quality materials including the interlocking armor design. The metal casing on the hose is made of steel. The commercial shows the hose withstanding a shark bite and a blow torch. Both of these tests are more extreme than general garden use would require.

The Hercules Hose does stand up to a lot of abuse. A car can be parked on the hose and it will not affect the flow of water. Lawn tools like a mower or a weed eater won’t damage the hose. Overall, I’d say the quality of the hose is very good.

None of the tests I’ve seen performed address whether the hose is subject to rust. If it’s made of steel it may be vulnerable to rust. Care instructions recommend storing the hose coiled up and away from the elements, but sometimes hoses get left out for a few days. What happens to the hose then?

The Hercules Hose has a sleek metal look, which is an unexpected switch from the common green water hose. Keeping the hose wound tidily and perched along the side of you home would be an attractive addition to your yard.

The interlocking coil design makes the hose easy to wind-up. Compare the experience of winding up a plastic or rubber hose compared to winding the Hercules Hose. A plastic hose seems to fight back as you try to coil it up. The Hercules Hose invites coiling.

As with many As-Seen-On-TV offers, the Hercules Hose comes with a great price and free add ons. Upgrading to a 50-foot hose gets you a free Quick Reel Holder to keep your hose wound up. The Hercules hose 100ft and 75ft hose also come with the Quick Reel Holder. Check for Hercules garden hose on Amazon.

This price is fair, especially considering the extras. Look for the hose in stores to save yourself about $10 worth of shipping. The reel comes with hoses over 50 feet in stores too.

How Does It Compare?

This hose has a pre-coiled design, making winding up the hose almost a non-issue. The hose begins at a length of 17 feet and extends to 50 feet. The hose expands from the water pressure.

Once the water is turned off, the hose returns to the 17-foot length. This feature alone makes this hose a great choice for an older person, a person with an injury or disability, or any person who dislikes rewinding the hose after use.

It's like having a 10-foot garden hose that reaches across the yard. The GrowGreen 91-GHB-50 offers the same no-tangle and no-kink promise as the Hercules Hose. The list of features doesn’t even mention that it’s lightweight. A 50-foot GrowGreen hose weighs 2.5 pounds to the 5.5 pounds of the 50-foot Hercules Hose.

There is no mention of toughness with the GrowGreen 91-GHB-50 hose. Its latex casing means it would probably be vulnerable to damage from lawn tools and even rough edges and fencing. Also, there is no mention of how the hose stands up to heat. How long before the latex endures sun damage?

The LawnPRO Expanding Garden Hose is another hose attempting to make the wind up process easier. The hose expands when in use, then shrinks to less than 20 feet when not in use.

This makes this hose a good choice for the casual gardener who is unable or unwilling to neatly wind up a hose after each use.

The LawnPRO claims to be the toughest of the expandable hoses due to its Denier woven wrap. While the Lawnpro may be more durable than most expandable hoses, it probably doesn’t compare to the standards of durability set by the Hercules Hose.

The Legacy Flexzilla 50-foot hose has an all-weather flexibility, withstanding temperatures ranging from -40 to 150 degrees Fahrenheit. This first feature makes the hose a great choice for those living in areas with extreme temperatures.

It also boasts that it is drinking water safe, making the Flexzilla a good choice for people who spend a lot of time outside. The Flexzilla has a few features in common with the Hercules Hose.

The Flexzilla is easy to wind up because it has a no-memory, lay-flat design. It is made of flexible hybrid polymer making it abrasion resistant. This hybrid polymer probably doesn’t hold up as well as the metal casing of the Hercules Hose, but barring extreme use, the Flexzilla is durable.