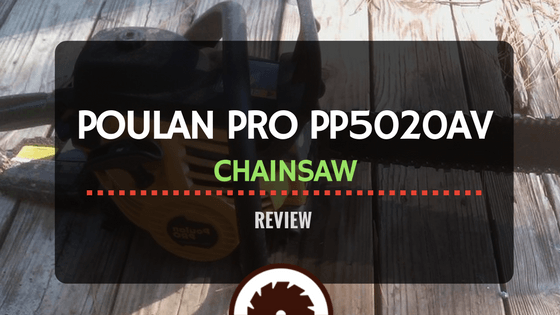 By our estimation, the Poulan Pro PP5020AV Gas Chainsaw is the best chainsaw under 200 dollars. Available with either an 18 or 20-inch saw bar, it can cut through logs and branches both small and large. A gas powered chainsaw, it packs a ridiculous amount of power for its price. In our Poulan Pro PP5020AV Review, we'll explain why we consider that,  although it isn’t the overall best chainsaw on the market today, it provides tons of value at a relatively budget price.

These are the Poulan Pro PP5020AV's main features:

Let’s begin our Poulan Pro chain saw review by talking about its overall construction and design quality. In general, Poulan chainsaws review quite well in this area. Made out of heavy-duty plastic and steel, it’s built to withstand quite a bit of wear and tear. Even if it’s dropped or accidentally banged against a solid object, it will continue to thrive.

Available with a saw bar of either 18 or 20 inches, this chainsaw can make its way through logs and branches of all sizes with ease. This long saw bar is driven by a tough engine which is designed to last over years and years of use. To keep it protected, it’s safely encased inside of a hard, forgiving gear casing.

One problem with the overall construction and design of this saw is that its gas cap has a tendency to squeeze on very tightly. At times, it can be an absolute struggle to get this gas cap removed.

Equipped with a large, roundabout handle, this chainsaw can be easily gripped by users with all hand strengths and sizes. It should, however, be noted that this saw is a little heavy. In total it weighs in at around 21 pounds. Smaller users might struggle to keep it steady while in use.

Overall, for its price, the PP5020AV possesses fantastic construction and design. It’s not flawless by any​​​​​ means, but at its price point, it’s about as sturdy and user-intuitive a chainsaw as you’re going to find.

The next part of our Poulan Pro chainsaw review is its overall ease of use. In general, this chainsaw is pretty simple to get up and running. You simply grab the handle, pull the drawstring, and get it fired up and running.

Because of its auto-lubrication mechanism, you very rarely have to oil its chain. As long as its oil tank is filled up, its chain will run smoothly and consistently, cutting through wood with little to no resistance. This makes for very little engine maintenance and care, and a whole lot more actual use.

One of the nicest things about this saw is that it vibrates very little. Typically with a chainsaw of this size and power, you’re going to get some pretty wicked shaking through the hands. But this chainsaw is designed in a way that reduces vibration and keeps it stabilized at all times. This greatly reduces fatigue, regardless of how big and strong you are.

Again, for its price, this chainsaw is very easy to use. Everything about it is fairly user-intuitive, from its drawstring starter to its oil and gas tanks, and otherwise. You’re not going to find a chainsaw that’s much easier to use at this price.

Now for our Poulan Pro PP5020AV 20-inch 50cc review, we’ll talk about the overall power of the chainsaw. A gas-powered saw, it produces a total of 55cc of power. Compared to other consumer chainsaws, this is about as powerful as it gets. You shouldn’t have much problem slicing through stumps, branches, or any other pieces of wood around your property.

It’s a relatively easy motor to get running. Equipped with a clutch, and a drawstring starter, it can usually be up and running within 1 or 2 pulls. This is a lot more than you can say for most gas chainsaws at its price point.

Possessing a gas tank that is easy to access, you can keep it fueled with little to no fuss or effort. By using this chainsaw with a full tank of gas, you can expect to get around 200 total cuts out of it. It’s not on the level of commercial chainsaws in this regard, but is spectacular for a residential, consumer chainsaw.

The truth of the matter is that, for its price tag, you’re not going to find a more powerful chainsaw than this. The PP5020AV is the most powerful budget chainsaw on the market today.

And now we’re on to the PP5020AV’s overall cutting ability in today's Poulan chainsaw review. As was stated, this chainsaw is available with either an 18-inch or 20-inch saw bar. This is a commercial size saw bar, meaning that it can make its way through some fairly huge logs and branches.

However, despite its powerful 50cc motor and long saw bar, the PP5020AV does sometimes struggle to make it through wood smoothly. In order to get it all the way through a thick piece of wood, there is often a decent amount of starting and stopping required. This can be a little frustrating when you’re trying to cut a lot of wood in a short time. Of course, if you give it enough time, it will eventually make its way through.

For safety purposes, this chainsaw is equipped with a protective guard between the gear casing and the saw arm. This guard will prevent your hands from slipping into the chain, and will prevent dangerous debris from blowing back against your body.

Overall the PP5020AV’s cutting ability is about average for its price. It certainly won’t blow you away. But considering that it’s a budget chainsaw, it gives you a decent amount of bang for your buck.

The last thing we’ll review in our Poulan Pro 18 chainsaw reviews is the chainsaw’s overall noise level. To put it plainly, this chainsaw is loud; a lot louder than many consumer chainsaws, to be honest. If you live in a close-knit residential area, this might not be the best chainsaw for you.

However, if you live in a rural area with few neighbors, there’s no reason that you shouldn’t buy this chainsaw. Because, while it’s loud, it’s not so overwhelmingly loud that it’s not worth using. And if you are sensitive to loud noises, you can easily help drown it out by wearing some ear plugs.

Again, when you consider its low price, the PP5020AV is fairly standard as far as overall noise goes. While you may be able to find some similarly priced chainsaws that are not as loud, you shouldn’t let noise be a deciding factor.

How does it compare?

When compared to the Tanaka TCS40EA18, the Poulan Pro PP5020AV is very similar. Both of these chainsaws possess long saw arms of 18 inches or over. This makes them both great for cutting purposes of all kinds, whether you’re trying to slice them through thin branches or thick stumps.

Where a huge difference occurs is in the overall size of the saws. To put it simply, the Tanaka is much lighter than the Poulan Pro. Weighing in at just 10 pounds, the Tanaka is much easier to handle than the 20-pound Poulan. Both chainsaws produce very little vibration, reducing overall hand fatigue, and allowing users to operate them more constantly.

Where the Poulan Pro beats the Tanaka saw is in price. In most places where you can buy these saws, the Poulan is available for around 50 dollars less. So, while it’s a little heavier and harder to handle, it’s also a lot less expensive.​

Another chainsaw that is very comparable to the Poulan Pro PP5020AV is the Hitachi CS33EB16 Gas Chainsaw. Available for around the same price as the Poulan Pro, it also contains many of the same performance characteristics.

As far as motor power goes, the Poulan Pro far out-beats the Hitachi. The Hitachi can only supply 32 cc of power, while the Poulan Pro supplies a total of 50 cc. This makes the Poulan Pro a much better saw for cutting through thick, hard wood.

Where the Hitachi beats the Poulan Pro is in overall handle-ability. The Hitachi weighs in at around 12 pounds while the Poulan Pro weighs in at over 20. This makes the Hitachi much more suited for users of small stature. It should be noted, however, that both chainsaws feel very comfortable while in your hands. Each is designed to reduce vibration and minimize fatigue.

If you were to pick one chainsaw on the market that most closely mirrors the Poulan Pro, this one by Hitachi would be it. Available for nearly the same price, they offer much of the same in performance and functionality. The only huge differences are in their sizes. The Hitachi is better for small users, while the Poulan Pro is best operated by bigger users.

The Husqvarna 450 Gas Chainsaw is a lot like a commercial-grade version of the Poulan Pro PP5020AV. It costs well over $100 more than the Poulan Pro, but also offers more functionality to make it worthwhile.

Both chainsaws supply around 50 cc of power, but the Husqvarna produces an overall stronger and cleaner cut. This has a lot to do with the quality of its saw bar and chain. It just reacts to snags and kickbacks in a lot more of a controlled manner. Both saws are available with saw bars of 18 and 20 inches.

When it comes to overall performance and functionality, the Husqvarna wipes the floor with the Poulan Pro. Of course, the Poulan Pro is available for a lot less money. Ultimately, the chainsaw you choose is largely based on what tasks you need to complete, and how much money you’re looking to spend. If you’re only going to use it around the house every once in a while, the Poulan Pro will get you by just fine. If you need to cut wood almost daily, you would be better served by the Husqvarna.