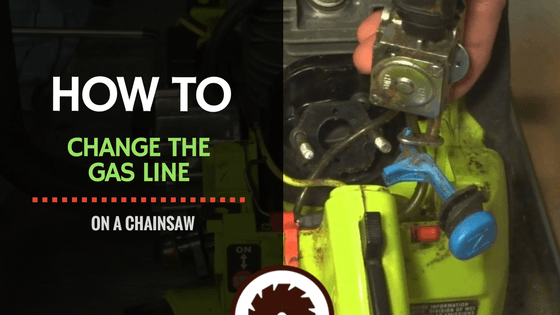 How to Change the Gas Line on a Chainsaw

Is your chainsaw fuel line clogged, cracked, or crimped? Or, is fuel leaking from the chainsaw engine? It's time you considered chainsaw fuel line replacement. It’s normal that, over time, chainsaw fuel lines get damaged. The damage may restrict the flow of fuel and prevent the engine from functioning properly. What's more, cracked fuel lines lead to leakages that pose fire hazards and danger to your health. This article focuses on a step-by-step guide on how to change the gas line on a chainsaw.

Fuel lines are made of plastic or rubber; hence, like the fuel tank, the lines are prone to break or crack due to misuse or wearing out. Small engines tend to have small engine fuel line sizes. For these, you need to have a small engine fuel line repair kit. In this tutorial, we’ll learn how to master the 2-cycle fuel line, where one line transports fuel from the tank to carburetor and the other carries excess fuel from the carburetor to the tank.

Since the lines are in constant contact with the fuel, they easily crack and get broken when gasoline begins to harden. Even small cracks create potential hazards as they allow air into the fuel system and fuel leaks.

Additionally, if you haven't used your chainsaw for a while, and it has been stored in a cold or dry location, the fuel lines become extremely delicate and get cracked. This explains the need for checking the chainsaw before you start using it.

Of course, lots of handy chainsaw owners will prefer replacing the fuel line without engaging experts. The time and cost involved in hiring them is something most chainsaw owners are not willing to pay.

How to Replace Fuel Line on a Chainsaw

Tips for Inserting the Fuel Lines

Empty the Fuel in the Tank

Wear work gloves before you embark on the task, to protect your hands.

Open the cap that encloses the fuel tank and drain all the fuel into an appropriate storage container to prevent hazards caused by incorrect disposal of fuel.

Remove the screws holding the cylinder shield to the engine using the wrench and lift it off.

You can then detach the wire from the spark plug and pull the cover from the air filter housing before removing the filter.

Straighten the coat hanger and twist the hook on end. Insert it at the end of the tank to hook the white cylindrical fuel filter. Cut the gas line to remove the fuel filter.

Unscrew the Nuts used to Mount the Carburetor

Removing the Air Filter Housing and the Carburetor

You should be careful not to damage the gas lines or bend the throttle linkage. You may take a few photos at this stage to ensure you reassemble the gas lines and carburetor correctly.

Disconnecting the Fuel Lines from the Primer Bulb and Carburetor

When you have pulled the gas lines from the carburetor and primer bulb, you can remove them from the gas tank using the needle-like pliers.

Cut the fuel lines using a pair of scissors at an angle to string them to the reservoir. Push the longer line into the tank by an inch and the smaller one far enough into the tank so you can grab it through the mouth of the container using the pliers.

You may quicken the process by lubricating the fuel line using a drop of oil.

Pull the smaller line from the end of the tank. You should then cut the end square to install the fuel filter. Be sure to pull the line back so that the filter resettles at the bottom of the tank. ​

Cut the fuel lines so that they reconnect to the carburetor.

Slide the carburetor on the mounting studs and carefully push it into place. Be sure to position the air filter cover on the protruding studs. ​

You may replace the nuts used to tighten the seal gasket located between the carburetor and the engine. Avoid crinkling the new fuel line when mounting the carburetor as it may call for replacing the fuel lines again.

After mounting the carburetor, reconnect the spark plug wire. Be sure to place the air filter in the housing before replacing the cover. Reattach the cylinder shield on the chainsaw and replenish the fuel tank.

How to Change the Gas Line on a Chainsaw: 2018 Tips and Tricks

The step by step guide shows how simple the process of replacing fuel lines is. However, it can prove tricky especially if it is your first time. Here are tips to help you get it right:

Get the Fuel Line Basics Right

As earlier highlighted, there are two chainsaw fuel line sizes: the one that transports fuel to the carburetor and the other returns unused fuel back to the chainsaw and to the tank. Normally, the return tube is larger than the fuel line that feeds gasoline to the carburetor. Note that both fuel lines flow from the fuel tank and are attached to the metal tubes protruding from the carburetor.

When replacing the tubes, it is important to cut the new fuel lines to the appropriate lengths. It explains why we recommended using the needle-nose pliers. This pair of pliers is the most suitable for removing the lines from the carburetor and pulling them from the fuel tank.

Note that when you are removing the fuel line that transports fuel to the carburetor, the small cylindrical fuel filter often pops off from the tube.

Thus, you need to hold the lengths of the original tubes against the new fuel lines to ensure an appropriate fit and length.

Using the right tools for replacing the fuel line makes the job much easier. Most people experience difficulties when inserting the new fuel line to the gas tank as it does not advance sufficiently to reach the bottom of the container. As such, once a small piece of fuel line appears into the hole, use the needle-nose pliers to hold it and pull. A pair of hemostats may also perform the same function.

You may also find it difficult to feed the new fuel line into the plastic tank. Instead of forcing it through the tank, spray a small amount of lubricant to allow easier entry.

Did you enjoy the tutorial? Knowing how to change the gas line on a chainsaw is important if you use chainsaws often since you it may not always be an option to hire a professional. If you have any doubts or tips I may have missed, be sure to leave a comment below. Remember to share if it helped you!