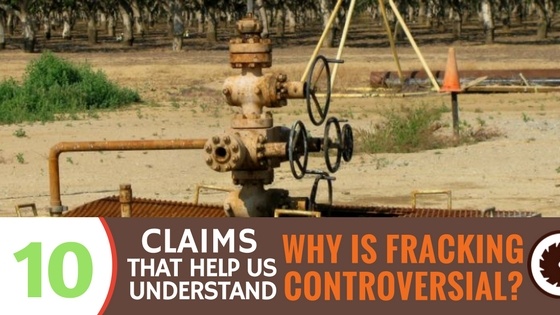 A hotly debated issue, fracking has been involved in both environmental and political arguments around the globe. Opponents feel that natural gas drilling will destroy drinking water, contribute to greenhouse gases, and pollute the air; while advocates believe it is an economical and safe clean-energy source. Fracking has actually been around for a long time, but it has only become controversial in the last few decades. This is our take on this controversy.

Why is Fracking Controversial?
What is fracking?
Why is fracking controversial?
History of Fracking
1. Running Out of Gas
2. Damaging Water Sources
3. Cleaner than Oil or Gasoline
4. Is the Groundwater Safe?
5. Vehicles Run Cleaner on Natural Gas
6. Leaking Faucets
7. Radioactivity
8. Chemicals in the Water
9. Altering the Countryside
10. Investing in Other Types of Energy

This process is most commonly done horizontally by drilling into the rock layer and creating new pathways to release the gas; or it can be used to lengthen channels that already exist. It can also be done vertically, but that is less common.

Why is fracking controversial?

Concerns have been raised by environmental lobbyists about the large amounts of water that are used to perform fracking. They also have concerns that the fracking process will cause small tremors in the earth like the two small earthquakes that happened in 2011 near fracking sites. Other concerns include the carcinogenic chemicals that are used in fracking that could possibly escape into and contaminate groundwater around the site where the fracking process is taking place.

Lobbyists feel that the government should invest instead in renewable energy as an alternative to relying on fossil fuels. With the small number of pollution incidents that are seen in the United States (where there is a significant amount of fracking done), these incidents are attributed to bad practices instead of a dangerous process.

Fracking first began in the gas and oil industry back in 1949. The industry began commercially when the fracking technique was applied in the gas and oil fields of Texas and Oklahoma and grew quite rapidly. For over sixty years, fracking has existed, but it has only recently become reason for controversy.

When considering why fracking is controversial, there are two main issues to consider:

The first reason is that up until recently, fracking was applied on typical, vertical wells and has only in the last decade been used commercially on horizontal wells. This has allowed for more underground areas to be reached, thus requiring a larger amount of fracking chemicals and water to be used down to process zones beneath aquifers.

The second reason is due to recent joining of fracking and horizontal drilling as a process that allows for gas and oil to be produced from the many shale formations in the country for the first time. Many of these formations had a high population living on them or near them that had not been exposed to gas and oil exploration before. It is possible that if fracking was a viable option in areas where hardly anyone lived, fracking would not currently be an issue.

The natural gas drilling controversy itself causes two problems. The first issue is the fear of water supply contamination from the chemicals used in the fracking fluid that has become the more public of the two issues. The other issue revolves around environmentalists and their opposition to the associated carbon emissions that come along with fracking.

1. Running Out of Gas

Not even a decade ago, government officials and industry analysts were concerned that the U.S. could run out of gas. That fear has passed as a vast amount of trapped natural gas has been discovered buried in deep rock layers. Two recent advances have made this gas accessible: hydraulic fracking, or fracturing, and horizontal drillings, that allow a well to be dug vertically to turn and twist over a mile sideways through the earth.

Developed over sixty years ago, fracking includes the process of pumping millions of gallons of chemically treated water into formations made of deep shale at a pressure of 9000 pounds per square inch or more. The shale is cracked by this fluid, or existing cracks are widened, allowing the freed hydrocarbons to flow towards the well.

Over the last ten years, an eightfold increase has resulted because of these advances in the production of shale gas. Shale gas will help to increase the output of natural gas over the next few years, but the U.S. is nowhere near the energy reserves of Saudi Arabia. It can, however, power all-natural gas devices in the U.S. for the next twenty years or so. Shale is an important part of developing the national energy policy, if used correctly.

Obviously, the process of hydraulic fracturing uses a lot of water since it can use up to seven million gallons to frack just one well. Of those seven million gallons, thirty percent will be lost trapped down in the shale. In some cases, there has been evidence that fracking contributes to water depletion, but in most cases of fracking, there is an adequate water system that regulates its usage.

In some instances, the amount of water used to frack a well is the equivalent of drinking water used in an entire city. Fracking is also using up water that was once used by other industries, like that of steel manufacturing. In comparison, fracking uses less water daily than the mining, natural gas development, and livestock industries.

3. Cleaner than Oil or Gasoline

Cleaner than either gasoline or oil, burning natural gas will emit half of the amount of carbon dioxide, a third of nitrogen oxide, and one percent less than sulfur oxides that are released in coal combustion. Methane does escape during the drilling process and when transported via pipelines, so not all the shale gas will make it to the power plant or fuel tank. It is possible that the methane gas loss could be somewhere as high as eight percent.

These leaks can be prevented by firmly sealing pipelines, wellheads, and condensers. It is also necessary to consider that drilling is an energy-intensive business that relies heavily on generator and diesel engines to fully drill a well. Lowering emissions is a problem that will need a solution, but so far there are few companies that have tried to address the issue.

4. Is the Groundwater Safe?

In the past, there have been surface spills that have contaminated groundwater in fracking areas; however, the overall fear that fracking fluids so deeply injected will gravel into the groundwater is largely untrue. When you look at basic geology, you see that it isn’t possible for contamination to start underground. The drilling process would have to cause a fracture to spread through thousands of feet of rock that keep deep shale gas deposits separated from freshwater aquifers.

Layers of rock with specific mechanical properties intervene to stop the expanding fissures from traveling toward the surface. Plus, the fracking fluid has been thickened with additives making it too dense to travel upward through that type of passage.

Unfortunately, there are not enough gas stations in the country that offer natural gas, and it would take years and billions of dollars to create an adequate infrastructure to support it and make it a viable option to compete with diesel and gasoline. But considering the trillions of dollars spent in wars each year, that’s a small price to pay in exchange for offering our children a cleaner environment. Honda is the only car manufacturer that makes a car that will run on natural gas.

That doesn’t mean it still can’t work. There are actually several cities that have buses that rely on it and that incorporate a central terminal for fill-ups to circumvent the lack of refueling places in the city. Local truck fleets could also follow the same formula making natural gas a feasible option than it has been in the past.

There is a lasting image from a documentary that features a man that causes a ball of fire to erupt by holding a flame to his kitchen faucet as he turns the water on. This image was intended as an indictment of nearby gas drilling. It was determined that the gas wells were not the cause, but rather that the water well for the home had naturally drilled into a pocket of methane.

Up to fifty layers of natural gas can exist between the deep shale formation and the surface. These shallow deposits have intruded with methane on groundwater close to fracking sites in other places when companies have not cemented the boreholes properly, and gas has drifted up the outside of the well, in between the steel casing and the rock, into the aquifers. This is an easy-to-correct problem by using stronger processing and cement casing that will develop a better bond which guarantees an impermeable seal.

Due to a radioactive signature, drillers and geologists will chart the huge underground formations in search of uranium isotopes such as radium-228 and radium-226. When they find higher radiation levels, they know there is a higher likelihood that the deposits will provide a substantial amount of gas.

However, this radioactivity doesn’t mean that the drilling will cause a public health hazard, given that many homes have been built directly on the drilling sites, long before fracking was even developed. Testing has yielded no evidence that there are elevated radiation levels and even some of the most vocal opponents to fracking have conceded that radioactivity is not one of the biggest problems facing the issue of fracking.

8. Chemicals in the Water

Greater transparency has increased under growing pressure that companies post the chemical compounds that they use in their well. Often non-threatening ingredients have been revealed including walnut shells and instant coffee along with some known carcinogens like methanol and benzene.

The question is what to do when the fluid that contains these ingredients rises back up to the surface. Certain processes are being tested, but most companies are recycling this water to use in the next well they plan to drill.

Political opposition to fracking has been concerned that natural gas development will change the landscape dramatically. The fears aren’t just from the drilling itself, but the economic boom that some areas have felt.

Development has increased in many areas that have seen an economic increase thanks to fracking, and residents are concerned that regulators won’t be able to keep up. This can have a big effect on those that want an increase in employment, but also don’t want the water quality and quality of life in the area to deter.

10. Investing in Other Types of Energy

With over a hundred years of natural gas now available, fracking is going to play a big role in the development of fuel in the future. It is possible that this technology can bridge the gap between polluting fossil fuels that are being used now and the possibilities of cleaner and renewable energy.

At the same time, the United States should continue to invest in wind and solar energy as well as persist in conserving power and implementing energy-efficient technology. Natural gas can be a transition fuel while we work on getting a larger percentage of nuclear and renewables available on the grid.

Most people can agree that fracking is big business, especially when you look at the areas of shale gas, and it definitely isn’t going to stop anytime soon. Within the next twenty years, the abundant amount of shale gas is predicted to make up nearly half of the U.S.’ natural gas production. Despite the controversy, fracking may end up being a viable solution to bridging the gap between our reliance on fossil fuels and the development of cleaner and renewable energy.