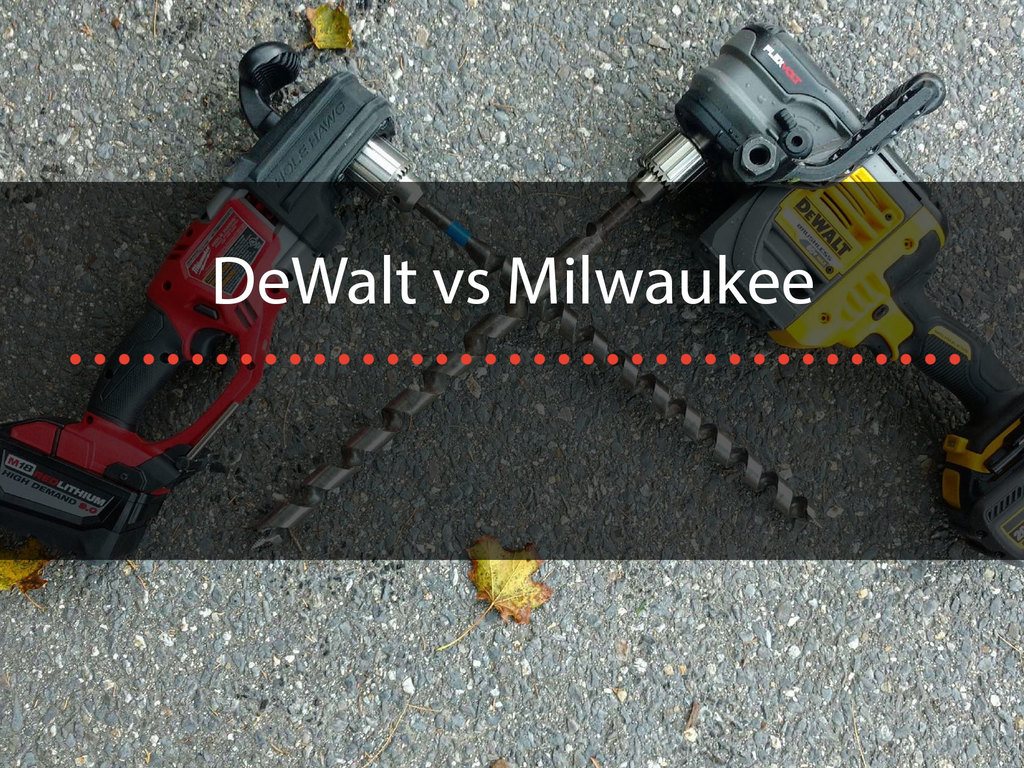 There are no two greater examples of American ingenuity and success. Both DeWalt and Milwaukee were first established on American soil in the 1920’s after addressing production issues in the industrial sector.

How Both Companies got Their Start

Even though their original designs were made to address problems in different industries, their innovative designs gave them the industry wide recognition that helped them to become known as two of the most Iconic brands that are still producing tools to this day.

Raymond E. DeWalt perfected the first radial arm machine in 1922. At the time he was working in a wood mill that had orders that far exceeded their production capabilities. The mill could not afford to employ additional staff and was at risk of failing to meet their orders. So Raymond sought a way to help increase the productivity of the workers.

By making a yoke, and connecting it directly to a motor and saw, he was able to fit it to a standard arm. This allowed the saw to be raised and lowered, and moved backwards and forwards, while being adapted to cut all types of angels. This one unit allowed Raymond to cut as much wood as four people in a single day.

Within two years Raymond established the DeWalt Production Company in Leola, Pennsylvania, where he fine tuned his design and produced the Wonder-Worker, the bases of today’s Miter Saws, Pull Saws, and Drop Saws.

A.H. Peterson had been producing tools and dies for the Ford Motor Corporation for several years. In 1922, he was approached by Henry Ford and presented with a challenge, “make him a portable lightweight 1/4-inch power drill”. He took this challenge and produced the industry’s first, lightweight, one-handed drill, and Henry Ford loved it.

Prior drills were heavy and required two hands to operate. Even then, they were so heavy and cumbersome that most people were unable to lift and operate the drills at the same time. These newer, lighter models named the Hole-Shooter, made production easier and in turn faster.

This was not the start of the Milwaukee brand however. Petersen originally began production under the A.H. Petersen Company in State Street, in the City of Milwaukee. This did not last long however, as a fire broke out in his factory and his business was unable to recover he was forced to close the doors in 1923.

This is where A.F. Siebert and history of the Milwaukee Electric Tool Company began. In 1923-24, Mr Siebert bought the business and the rights to the Hole-Shooter at an auction. His main intention was to improve upon the Hole-Shooters design and develop it’s sales potential.

Milwaukee started out by repairing existing tools that were already on the market. By assessing the mechanical faults of these machines, and listening to customer feed back, they were able to make the Hole-Shooter stronger and more durable. They even started to develop horsepower motors to meet their clients specific needs.

The drills that we have today, owe their design to the Hole-Shooter and Milwaukee’s original designs that helped lead the development these tools.

Over the years in the lead up to the war, both companies experienced their own steady growths and developments. Once America became embroiled in the 2nd World War, these two American Companies were called upon to help aid in the war efforts by supplying tools and equipment to help meet the wartime machinery requirements.

To some people, these government dealings are what helped to ensure the future success of these companies, as well as the strengthening of their brand names and reputations as reliable tool manufacturers. It can’t be denied that their experiences here, are what helped to define their business models going forth.

By 1929, DeWalt had relocated into a larger factory in Lancaster, Pennsylvania. This additional space allowed them to increase the productivity of their tools and machinery, which was vital in meeting production demands during the war effort.

In 1941, the company was given government contracts to supply the national defense force with tools that could be used in the manufacturing and repair of war machines.

Though it would take another 50 years before they being to target the broader market of home renovators, hobbyists, and professionals, here they were able to learn how to better mass produce their tools.

This was when Milwaukee’s equipment was given specification ratings by the US government. These ratings allowed them to commence production on a range of tools that met the Naval specifications and needs. During the war, Milwaukee’s lightweight drills were favorable in the assembly of US aircraft.

The standards that were set during this time period would go on to influence the future designs of all of their equipment – rugged, durable and powerful – with each one being designed for industrial use.

Both of these companies have a rich and proud American history. Having being founded back in the 1920’s, to this day they still continue to manufacture and produce tools in the US. Yet in the world of capitalism there’s no guarantee of who will own or control these businesses in the future.

Over the years since their first successes, both companies have been bought and sold several times. Now both companies are held by corporations that own several other brands/manufactures of tools, accessories and equipment.

For almost a hundred years DeWalt has managed to remain American owned and operated company since 1924:

For a while there Milwaukee managed to remain an American owned business. But as things go in the corporate world, the company that acquired them in 1976 was taken over by a Swedish company in 1995. Today Milwaukee is owned by the Chinese company Techtronic Industries Co. Ltd.

Both brands are as iconic as they are, due to their reliability and performance. Neither brand is known for skimping out on quality just to save a few bucks.

Comparing the two side by side is like comparing apples and oranges though. This is because both brands are targeting different markets, that have different needs and demands.

DeWalt is known for their affordable quality. DeWalt power tools tend to be lighter then Milwaukee’s. The trade off is that many of their tools are not as powerful as the Milwaukee’s equivalent model.

This doesn’t mean that DeWalt is an inferior product. Quite the opposite actually. DeWalt is on par, in that their products have the same value for money as the more expensive Milwaukee tools.

DeWalt’s target market is everyone; the home renovator, the professional, amateurs and apprentices, and even the hobbyist and occasional repairer. Their aim is to make affordable tools that can be used by anyone, and that can do the job.

Milwaukee on the other hand, is known for their sturdy tools. They are designed to be durable enough to handle the occasional knock, and fall on a work site. Simply put Milwaukee isn’t concerned about affordability, they are not targeting the mom and dad renovators, amateurs or hobbyist. They are only interested in marketing towards the professional trades workers. People that need heavy duty tools that are both tanky and powerful.

This means that their tools are rather expensive, with some trades people spending 10’s of thousands of dollars on their complete kit. But once bought they have tools that will do the job and last for years. Many of the tools in the Milwaukee range can even be serviced and repaired like any other piece of machinery, making their price tag a worthwhile investment.

Most Milwaukee tools are generally more powerful then a DeWalt’s, as they use bigger and stronger components and motors. This does tend to make most of the Milwaukee tools heavier and more cumbersome to use however.

Trying to determine which is the better brand, is better done by firstly working out who you are, and what you intend on using the tools for.

A professional of any caliber that needs a durable and reliable tool that’s going to last them for years and can handle a bit of rough handling, will be off with a Milwaukee.

Those looking to use a tool occasionally, or for the odd job here and there, may find a DeWalt could be a more cost effective tool.

Light jobs that don’t require a lot of power to complete, could be better done with a DeWalt. Milwaukee tools can be a little over powered for some of the more delicate jobs. Obviously this depends on the task at hand, and the required tool set.

If money is no option, the Milwaukee price tag can be ignored. If you have a budget, the DeWalt’s affordability will make them more appealing.

Finally for those of you who are starting out a business, or an apprenticeship and need to use tools. Our advice would be to supplement your tool kit with DeWalts and Milwaukees. Tools that you are going to be using a lot, you will be wanting to have the more heavy duty tool, as it will save you money over time. If you need to start out on a budget, start off with DeWalts, and over time replace the important tools with Milwaukees.

Ultimately, which brand is better will come down to your own budget, and your intended use for the tools. You may want to even consider intentionally having both brands on hand. Be sure to choose the tool that right for you and for the job.