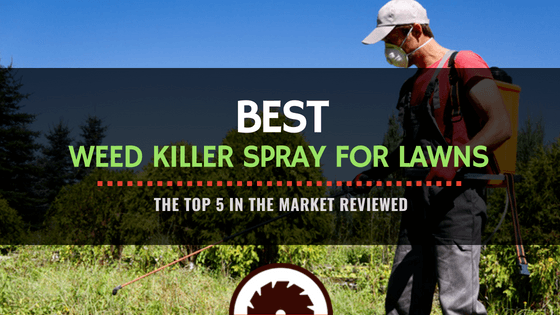 Maintaining a lawn might seem like a difficult task, especially when weeds sprout up and become a pesky problem. Weeds can be very difficult to get rid of because they need to be killed at the root and are easily propagated. While there are several ways you can kill weeds, a common and simple way to kill weeds is to use a weed killer spray. Today, we offer you a few options and reviews for the best weed killer spray on the market.

How to Identify and Get Rid of Weeds

Weeds can wreak havoc on your manicured yard or lawn, as they are very difficult to get rid of once they have sprouted. They also spread very easily as their seeds are easily propagated, which can be a nightmare for any homeowner. Once weeds have emerged from the soil, they need to be killed at the root. While there are several ways to kill weeds, you should determine the type of weed you have and what kind of weed control you need to rid your lawn of unwanted weeds.

Weeds come in many different types, but all types can be very difficult to control. Dandelions and clovers are two very common types of weed and are classified as broadleaf weeds. A broadleaf weed is a perennial weed that typically emerges in early fall.

To learn how to identify common yard weeds, watch this video:

Choosing the Best Weed Killer Spray for Your Needs

A simple way to control weeds is to use an herbicide that is specially formulated to kill specific plant species. However, not all types of weed killer sprays are the same. The two major types of weed killers are classified as either selective or non-selective, and are often sold as a weed killer concentrate. Let's take a look at four popular types of herbicides:

The oldest way to kill weeds is to use an organic weed killer like vinegar. Vinegar contains acetic acid, which acts as a natural herbicide and will kill weeds without using chemical additives, which is better for the environment and everyone's health.

To learn how to use vinegar as a weed killer, watch this video:

These are formulated to only kill certain types of weeds such as broadleaf weeds. These types of herbicides are a perfect solution if you are trying to figure out how to kill weeds but not grass and other vegetation, as selective weed killers only target specific types of weeds.

A major caveat of these types of herbicides is that they sometime kill certain types of grass such as St. Augustine grass, so it is important to always do a test patch on your lawn to determine if your selective weed killer is also a weed killer safe for grass.

Selective, non-selective and organic liquid weed killers all kill weeds by similar mechanisms as the herbicide is absorbed through the leaves. Dry weed control agents come in granules that contain weed control chemicals. Post-emergence granules are also absorbed through leaves and then travel down to the roots, where they kill the plant.

Most weed control granules are post-emergent weed killers, meaning they kill weeds after they sprout out of the soil. In order for granules to effectively eliminate weeds, one must first water the lawn, so as to allow the product to dissolve on the unwanted plants.

When to Apply Weed Control to Lawns

If you’re wondering the best time to apply weed control to your lawn, it is dependent on the type of weed killer. Pre-emergent weed killers are typically applied to lawn before watering, allowing the weed killers to travel down to the soil and prevent weeds from growing whereas post-emergent killers are usually applied after watering your lawn.

Overall, there are several types of weed killers. Choosing the best weed killer will depend on your type of weed and also your lawn’s needs. You should choose the weed killer that can best meet these needs.

To learn how to effectively spray weeds, watch this video:

Compare-N-Save Concentrate Grass and Weed Killer, 41-Percent Glyphosate weed spray contains glyphosate, a post emergent weed killer, that kills weeds by being absorbed through their foliage and travels through the root which it then kills. It promises visible results within 2-4 days and is rainproof in as little as two hours.

This product can also cover over 25,000 square feet and it is ideal for walkways, driveways, along fences and in flower beds. Because it is a non-specific herbicide it can kill all living vegetation, so it should not be used to spot treat a lawn and special consideration should be taken around plants. It also does not prevent new growth nor does not leave any residual activity and treated areas can be replanted the next day. It is great for both commercial and residential use.

Spectracide Weed & Grass Killer2 (Ready-to-Use) (HG-96017) (1 gal) is a ready to use non-selective weed killer that will kill all types of weeds including the common broadleaf weeds. Since it is a non-selective weed killer it will kill all types of weeds, grass, plants and other living vegetations so it is not suitable for lawns.

It is best suited for weed control arounds fences, walkways, driveways, in flower beds and planters. Results are typically visible after 3 hours and it is rainproof as soon as 15 minutes after application. It can be used for both residential or commercial uses but should not be used on lawns or spaces with grassy areas such as parks or golf courses.

Plants and other vegetation that may accidently come into contact with the product should be thoroughly cleaned as it will kill all types of plants and greenery.

Ortho Weed B Gon MAX Weed Killer for Lawns Plus Crabgrass Control Ready-To-Use Trigger Spray, 1-Gallon is a selective weed killer spray, so it selectively targets about 190 different types of weeds such as broadleaf weeds and crabgrass without harming lawns and other types of vegetation.

This is a great weed killer for lawns and other grassy areas such as parks or golf courses that are plagued with weeds. It can also be used on walkways, along fences, in plant and flower beds, and in other areas. It is suitable for both residential and commercial use.

This product begins to work within hours after application and is rainproof in about an hour after application. Some consumers have noticed that this product will affect their St. Augustine grass, so you should always do a test patch on your lawn. This product also comes with a trigger spray, so it is ready to use after purchase.

Spectracide Weed & Grass Killer2 (AccuShot Sprayer) is a weed and grass killer that kills over 155 types of weeds including the most common weeds and clovers. It is classified as a non-selective herbicide, so it will also kill and harm any grass, shrubs, plants and other types of vegetation it comes into contact with.

It is not suitable for spot treatment on lawns since it will kill all vegetation. This product produces visible results within 3 hours, so it is a very quick solution for weeds along walkways, fences, driveways and other places where weeds sprout up. It does not have any soil activity, so it will not harm nearby plants unless they come into contact with the product.

This product comes with an extendable power sprayer so there is no need to purchase an additional sprayer or wand. This is suitable for both residential and commercial use but should not be used on grass or lawns.

Southern Ag 2,4-D Amine Weed Killer Selective Broadleaf Weed Control is a selective herbicide, so it is formulated to kill weeds but should not harm your grass. It selectively targets dandelions, chickweed, poison ivy and other types of broadleaf plants.

Like many other selective herbicides, it can affect certain types of grass such as St. Augustine grass, so you should always test it on your grass first. As this product is ready to use, some consumers have stated that their weeds required a few rounds of treatment before they were killed.

It is suitable for both residential and commercial use and is best for parks, lawns, golf courses and other grassy areas that have lots of weeds throughout. Some consumers have also complained about a strong chemical smell.

Compare-N-Save Concentrate Grass and Weed Killer, 41-Percent Glyphosate weed spray is the overall winner and is the best weed killer spray. It contains glyphosate, a post-emergent weed killer that eliminates weeds by being absorbed through their foliage and then killing the roots. It will also kill anything else that it comes into contact with.

It produces visible results within 2-4 days and is rainproof in as little as two hours. It is suitable for both residential and commercial use and is best for walkways, driveways, along fences or in plant and flower beds. Overall, it is the most effective weed killer spray on the market.