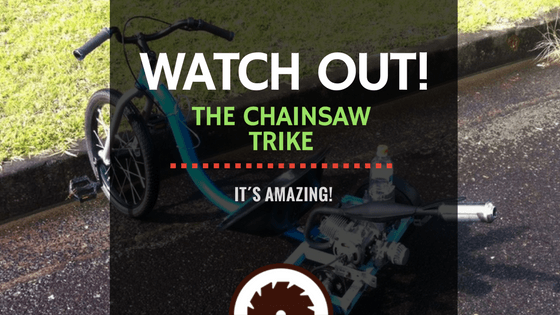 If you've outgrown your tricycle, convert it to a "chainsaw powered trike!" Problem solved. At least it was for inventors, Dustin Sloan and Trenton Carlson. At first glance, the invention seems a bit laughable, but after watching a modified three-wheeler racing across town to the roar of a 33c gas-powered chainsaw, you can't help wondering if they might be onto something. Incidentally, they had discovered a new and surprisingly entertaining way to get around the Georgia Tech campus.

The YouTube video shows Dustin replacing the chainsaw's clutch with a new, welded-on sprocket, and swapping out the pedals for aluminum rods designed to serve as feet placements.  The engineering appeared to be solid enough, which is impressive considering the trike was fitted with spare robot parts.​

After an initial test run ended in failure, it was back to the shop for these engineering majors, apparently with a plan to add additional reinforcements. They installed new hubs onto the rear axles in order to accommodate the new, heavier Colson wheels which were added in place of the original ones.

After three weeks, Dustin rolls out onto the sidewalk with the redesigned Radioflyer and takes off to Freshmen Hill. The trike glides remarkably fast, garnishing only a few brief stares, almost as if motorized toys are business as usual at Georgia's premier tech campus. Although the invention was undoubtedly inspired by the school's decades-old tricycle racing tradition, it's unlikely that anyone has seen anything quite like this. The ride ends, and Dustin emerges from the tricycle unscathed, despite the apparent lack of brakes.