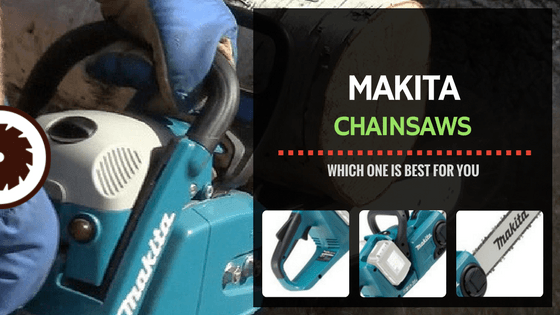 Makita is a Japanese manufacturing company which specializes in the creation of power tools. The company makes everything from saws, to jackhammers, to chainsaws. Makita chainsaws are considered to be some of the absolute best on the market today. With gas, corded electric, and battery-powered models available, Makita is sure to have a chainsaw that suits your specific needs and purposes. In our Makita Chainsaw Review, we’ll be looking at 5 of their top chainsaws.

What Type of Chainsaw is Best for You?

Here’s a YouTube video that will give you tips on using a Makita chainsaw:

The downsides to gas chainsaws are that they’re much louder, and more expensive to maintain over time. You must make sure that your chainsaw is filled with gasoline before each and every use. Filling up a gas chainsaw over and over again over time will cost you a lot of money that you wouldn’t have to spend with a corded electric of battery-powered chainsaw.

Corded electric chainsaws are, for the most part, fairly powerful. They’re not as powerful as gas models, but will still cut through the majority of logs and branches with ease. In general, these are the most inexpensive types of chainsaws on the market. They are usually the best option for homeowners who just need something to have on hand.

Battery-powered chainsaws are a little hit-or-miss. The high-end models are typically very powerful, and extremely functional overall. The low-end models typically possess very little power, struggling to make it through even the smallest of branches.

However, if you purchase a high-end model, you’ll receive excellent portability and power capabilities. You also won’t have to deal with maintenance and operation costs through the years like you would with a gas model.

As long as its battery is charged, your chainsaw will operate adequately. Battery-powered chainsaws are usually not the best for commercial purposes, but can be spectacular for those who own large yards with few power outlets.

Click here for a detailed review of top battery-powered chainsaws

How Do They Compare?

Both the Makitas and the Dolmars possess top-notch functionality, comparing favorably to the majority of chainsaws brands on the market today. Let’s compare the Makita with some rival brands, shall we?

Balancing the benefits of each of these products will help you decide which is the best type to fit your needs.

DeWalt is no slouch when it comes to power tools, dominating in a number of different tool categories. When it comes to chainsaws, the DeWalt vs Makita battle is an interesting one. In terms of quality, they're both terrific. Where the brands differ is in their overall selection. Whereas Makita offers gas, corded electric, and battery-powered models, DeWalt is essentially limited to just battery-powered.

So, while Makita dominates DeWalt on gas and corded electric chainsaws, DeWalt wipes the floor with Makita when it comes to battery-powered chainsaws. Both brands are elite in the world of the modern chainsaw.

While Milwaukee certainly makes some excellent power tools, their chainsaws are far from their crown jewels. The only reason you should ever buy a Milwaukee chainsaw over a Makita one is if you’re trying to find something for a little less money. Otherwise, you’ve to go with the Makita.

When it comes to chainsaws, Makita’s biggest rival is easily Stihl. Stihl makes a variety of top-tier chainsaws with all different power sources, from gas to corded electric, to battery-powered. Odds are, if you need a chainsaw, Stihl has one that will suit your purposes perfectly.

Overall, Stihl has a slightly larger variety than Makita. It should, however, be noted that Stihl chainsaws are typically more expensive than Makitas. In general, they both do a superb job of cutting through woods both thick and thin.

All in all, this matchup is a toss-up. Both chainsaws provide excellent power, durability, and functionality. If you’re trying to choose between the two brands, you would probably be best served by picking the less expensive option.

Click here for a detailed review of Stihl chainsaws

What to Consider When Choosing a Chainsaw?

When choosing a chainsaw, there are a number of different things you must consider. Not all chainsaws are created equally. By considering these things, you stand the best chance of purchasing a chainsaw that fits your specific needs and purposes. These things include construction, ease of use, power, cutting ability, and noise level.

The vast majority of chainsaws are made out of heavy-duty steel and plastic. Possessing these construction materials allows them to withstand tons of wear and tear, enabling them to exist in rough workshops and heavily wooded areas.

It’s important to consider the length of the saw arm on your desired chainsaw. Most saw arms range between 14 inches and 20 inches.

Whereas electric chainsaws can typically be turned on with the press of a button, gas chainsaws have to be revved up with the use of a drawstring. After turning a chainsaw on, you must ensure that it’s easy to operate. Some chainsaws are lightweight and easy to handle regardless of your size. Others are large, heavy, and bulky.

Chainsaws are available at all different power levels. Battery-powered saws usually range from 18 volts to 60 volts. An 18-volt chainsaw is best suited for smaller branches while a 60-volt will handle the vast majority of branches and trunks.

Gas saws possess everything from 35cc motors to 60cc motors. Anything above 40cc should do a reasonable job of cutting through large branches and stumps.

Corded electric chainsaws typically possess motors between 5 and 15 amps. Whereas 5-amp saws are best equipped for small tasks such as cutting branches, anything over 10 amps should suffice for cutting large branches and trunks.

A chainsaw’s cutting ability is not totally based on its overall power. Different chainsaws are designed in different manners, making some of them much better for specific tasks than others. Chainsaws with automatic oiling mechanisms will typically run smoother over time, allowing you to make quality cuts with ultimate consistency.

The truth of the matter is that all chainsaws are noisy. Even the quietest one you find will produce an annoying, screeching sound. However, not all chainsaws possess the same level of noise. Whereas gas saws are generally very loud, battery-powered and corded electric versions can be downright bearable

If you’re looking for a top-notch battery-powered chainsaw, you might well be interested in this XCU02Z from Makita. A compact and easy to handle chainsaws, it works terrifically for use around the house.

Possessing a 12-inch saw arm, this saw weighs in at around 12 pounds. If this were a long chainsaw, it might be a little difficult to control. But since it’s so compact, it places all of the weight into one area, giving it excellent balance and stability during all points of use.

Running on an 18v battery, it operates for around one continuous hour on a full charge. It possesses very respectable power, especially for its size. At its max, it’s capable of making it through 10-inch wide branches or stumps in one fell swoop.

All in all, the XCU02Z is a terrific chainsaw, and arguably the best of all Makitas. While it’s not designed for commercial use, it’s a very handy tool to have around in case you need to trim up some thick branches.

Our next Makita chainsaw review involves the Makita UC4051A. A corded electric chainsaw, it’s available for a mid-level price. Possessing excellent construction quality, cutting ability, and power capabilities, it’s a great tool for use in small and medium sized yards.

Equipped with a 14.5-amp motor, it packs plenty of power, allowing it to make its way through branches and stumps both big and small. Capable of starting up with just the pull of a trigger, it is ridiculously easy to operate.

This saw comes equipped with a 16-inch saw arm, allowing it to cut quite a bit of wood at one time. Weighing in at around 16 pounds, it’s a little heavy, but not unbearable. In order to give it stability and balance, it’s equipped with two different handles.

Of course, because this is a corded chainsaw, it can only be used in areas where a power outlet is present. This limits its portability, and makes it so that it can really only be used in small and medium sized yards. But overall, for its purpose, this is a terrific chainsaw. If you’re looking for a very solid product to keep on hand around the house, this one won’t do you wrong.

Our next Makita chainsaw review will cover the Makita UC3551A. A corded electric chainsaw, it provides mid-level power and cutting ability and a mid-level price.

This saw comes equipped with a 14-inch saw arm, making it large enough to cut small and medium size branches and logs in one swipe. It weighs in at around 15 pounds, putting it on the heavier side when compared to other chainsaws.

However, because it’s equipped with two different handles, it’s very easy to keep control of.  A nice feature of this chainsaw is that it has a transparent oil level. This allows you to see how much oil is existing in its chamber. Though it’s ideally filled up with Makita electric chainsaw oil, it can run adequately on any oil.

Sporting a 14.5-amp motor, it packs more than enough power to deal with small and medium sized woods. All in all, this is a terrific chainsaw for at-home use; specifically, if you’re looking for something a little smaller than the UC4051A.

Perhaps you’re interested in the power and portability of a gas chainsaw? If so, you might consider the Makita EA4300F40B. While it’s certainly on the expensive side, it provides power, transferability, and maneuverability that make it worth its price.

Coming with a 16-inch saw arm, it can make its way through the majority of branches and stumps. Sporting a 42cc motor, it’s not the most powerful gas chainsaw on the market, but still very powerful nonetheless.

At 15 pounds, it’s relatively lightweight for a gas chainsaw. It’s designed in a compact manner which allows for ultimate control at all times. All in all, the EA4300F40B is an excellent chainsaw for commercial use.

Now it’s time for our second Makita battery chainsaw review. This time we’ll take a look at the Makita LXCU01Z. A miniature chainsaw, to say the least, it’s terrific for small, periodic, around-the-house use.

This chainsaw’s saw arm measures in at just 5 inches. Obviously, it’s not designed to cut large, thick branches. But when it comes to small branches, it does its job exceedingly well. It weighs in at just 6 pounds, making it ridiculously easy to hold and maneuver.

It runs on an 18-volt battery, giving it respectable power, especially considering how small it is. Complete with an auto-tension mechanism, it can be turned on and off with just the pull of a trigger.

All in all, this is a great little chainsaw for those who only need to trim branches every once in a while. It’s small and lightweight, but powerful enough to get the job done in very little time. Available for a reasonable price, it’s a solid buy.

If you’re looking for a high-quality chainsaw, Makita is a good company to turn to. Standing respectably next to Stihl, DeWalt, and other heavy hitters of the power tool industry, Makita offers a bevy of different chainsaws, from gas models to electric corded models, to battery-powered models.

But the king of all the reviewed Makita chainsaws today is the Makita XCU02Z 18V Lithium Ion Chainsaw. This battery-powered saw offers excellent power, handleability, and portability, allowing it to be used anywhere with great success. If you own a large property and are looking for a chainsaw that can accommodate it, this is it.