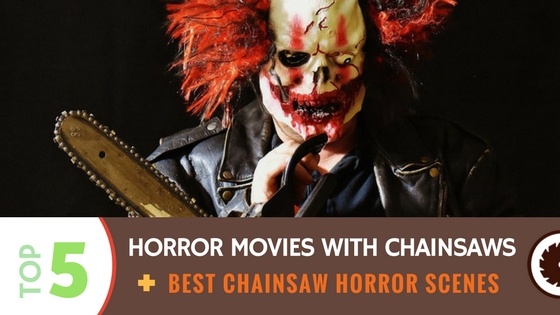 If you love watching horror movies, then you can agree with me that a chainsaw is one of the most lethal weapons used in this genre. The wood-cutting device’s brute and destructive force is tactically employed in the elimination of the weak and the unfortunate, as well as those who are found in the wrong place at the wrong time.

If you doubt, then it’s evident that you are yet to watch the best horror movies with chainsaws, the likes of Hollywood Chainsaw Hookers, Dead Snow, Pieces, and The Texas Chainsaw Massacre. In this post, I have scrutinized and given a synopsis of each horror title with the view of helping you enrich your movie repertoire with a little chainsaw action.

The first movie in this review is based on Sally, her brother, and three friends who head to a cemetery in rural Texas to investigate allegations that their grandfather’s grave had been vandalized. They encounter a family of cannibalistic psychopaths who butcher everyone except Sally using a chainsaw.

After visiting the cemetery, Sally Hardesty, Franklin (Sally’s brother), Kirk, Pam, and Jerry decide to visit their grandfather’s homestead. On the way, their van runs low on gas, and they stop at a nearby filling station to refuel it.  Unfortunately, they never get around to refueling their van, since the refilling station's pumps are empty. They proceed with their journey and Franklin suggests that they visit a nearby swimming hole.

Their mission leads them to a small clapboard house, occupied by a cannibalistic psychopath. Kirk enters the old clapboard house calling out for gas. Leatherface, the cannibalistic psychopath who stays in the house kills Kirk using a hammer.  Later on, Pam goes into the house looking for Kirk. Leatherface traps and impales her on a meat hook. From the hook, Pam witnesses as Leatherface butchers Kirk using a chainsaw.

With darkness falling, the remaining friends start calling out for Kirk and Pam. In the event, they encounter Leatherface who murders Jerry, and Franklin using a chainsaw. Sally flees to the filling station for safety.  At the filling station, the proprietor who is also a cannibalistic psychopath kidnaps Sally and hands her over to the hitchhiker they threw out of their van and Leatherface.

This chainsaw killer movie is based on a detective who is hunting for a maniac that mutilated several university coeds using a chainsaw.

This horror movie starts with Timmy, a ten-year-old boy who is trying to assemble a jigsaw puzzle of a naked lady.  While playing with the puzzle, Timmy’s mother walks into the scene snatches the puzzle and rebukes the little boy. Later on, she asks the boy to get a plastic bag that she could use to dispose of the pieces of the puzzle.

Instead, the little boy comes back with an axe, which he uses to kill the mother. After the murder, the little boy sawed the body into several pieces and then resumes playing with his jigsaw puzzle.
The police arrive at the scene, and they find the little boy hiding in a closet. Timmy tricks the cops that a maniac murdered his mother, and as a result, the police send Timmy to live with his aunt.

Four decades later, a man sneaks into an apartment where he unlocks a box with clothes covered with patches of dry blood. Besides the clothes, he also uncovered Timmy’s unfinished puzzle. Elsewhere, in a particular university, an unknown black-clad man is seen trimming shrubs using a chainsaw. After some time, the man approaches and cuts off the head of a female student using the chainsaw.

The serial killer continues killing several female students using a chainsaw, each time getting away with some parts of the mutilated bodies. It is later discovered that the serial killer was the campus' dean.

Hollywood Chainsaw Hookers is based on a private detective who is looking for a teenager female who had disappeared. During his hunt, the detective comes across a cult of maniacs who trick and murder young men after deceiving them with the promise of hooking them up.

The Hollywood Chainsaw Hookers is another great horror movie with some of the best chainsaw horror scenes. Besides being a horror movie, the Hollywood Chainsaw Hookers also has some comic scenes intended to give you a break from the tense scenes.  The movie starts with the disappearance of a young woman known as Samantha. Following the disappearance, Jack Chandler, a renowned private detective is deployed to track her.

During the search, the detective gets leads that Samantha had joined a cult of chainsaw-wielding prostitutes. The cult was headed by ‘The Stranger', the same character who played the role of Leatherface in the Texas Chainsaw Massacre. The Strangers’ cult is made up of a team of prostitutes who trick men into their private premises, whereby they are cut up into tiny pieces using the chainsaw.

Already, this cult had murdered several men who had fallen into the bait of getting laid. One day, Jack ends up in a strip club in pursuit of Samantha. While in the said strip club, Jack's plans are discovered by Mercedes, a chainsaw-worshiping member who plans to perform a ritual on him.

Ash is captured and enslaved by Lord Arthur. One day, he is pushed into a pit harbored by monsters. In the hole, Ash fights and defeats two monsters using a chainsaw. He was later titled as ‘the chosen one' by Lord Arthur's army.

This chainsaw horror movie starts with a brief flashback that helps you understand how Ash is trapped into the 1300 medieval times. In the flashback, Ash travels to the Medieval England whereby he is captured by Lord Arthur and his battalion. He is captured alongside some other men. Lord Arthur's men confiscated Ash's gun and chainsaw and they enslaved him. Later on, Ash is thrown into a pit where he repossesses his chainsaw. In the hole, Ash uses the chainsaw to fight two monsters.

After fighting the monsters, Ash starts looking for ways through which he can escape the medieval times and return to his present time. Arthur's wise man advised him that he could only escape the medieval times after retrieving a certain Necronomicon book. Ash starts his mission to retrieve Necronomicon through a haunted forest where he battles with unseen forces. He finally arrives at his destiny, where he finds three books instead of one. He grabs the right book and flees back.

After returning with the book, Ash demanded to return to his time. Unfortunately, his lover Sheila is taken hostage by a flying deadite. Ash is forced to stay back and organize an army to save Sheila from the deadite. Ash and his army manage to save Sheila, and afterward, he is returned to his present.

This horror film features eight medical students who travel to the Arctic Cordillera. While hiking, one of the students disappears, and a mysterious resident suggests that zombies might have captured her in the nearby woods.

This horror movie starts by zombies in Nazi uniforms chasing a woman through the snows of Norway. Later on, the zombies corner the lady, and they eat her up. Elsewhere, a group of seven students is seen drinking and partying while they wait for their colleague. Moments later, a mysterious hiker arrives at the scene, and he narrates the mountain's dark history. The hiker leaves after the narration.

In the next morning, Vegard, one of the seven medical students starts looking for Sara who had not yet turned up. While searching for Sara, Vegard finds the hiker murdered in his tent. In the event, Vegard falls into a cave covered by snow.  At night, Chris, one of the remaining students goes to the toilet where she is murdered. Later on, zombies attack the rest of the students and they kill one more student. The rest survive after locking themselves in the cabin.

In the next morning, two of the survivors arm themselves with a chainsaw and axes to fight the zombies. During the struggle, a zombie bites one of the students on the arm. To avoid becoming a zombie, the student cuts off his own hand using the chainsaw. The other students die in the struggle with zombies.

Well, there you have it. I’m honestly not a fan of gore myself, but I thought it’d be interesting to see how chainsaws are perceived in the minds of horror writers. And well, it’s Halloween anyway, so what the heck! Did you find this list of chainsaw horror movies interesting? Would you add/remove any to/from the list? Don’t forget to share the post with your horror film-loving friends!